Global Artificial Intelligence (AI) in Oil and Gas Market Share Likely to Surpass at a CAGR of 13.5% By 2030

According to Custom Market Insights (CMI), The Global AI in oil and gas market has presented a growth of USD 2.32 billion by 2022 and is expected to touch USD 7.99 billion by the end of 2030 at a compound annual growth rate of 13.5% during the forecast period.

The introduction of artificial intelligence in the gas and oil market has helped companies to maintain a perfect record regarding the various business steps that have been taken along with the records of demand and supply that are conducted over the period of time.

The inclusion of artificial intelligence in oil and gas market has helped to modernize the entire system of the various industries that have adopted this technology. The maintenance of the various equipment and devices that have been involved in the production of oil and gas are kept under close watch with the help of artificial intelligence and hence smart diagnosis is facilitated with it. This helps to increase the productivity of the manufacturing unit and hence helps the company record considerable revenue over time. Rapid advancements made by the key market player regarding the various solutions and services provided by artificial intelligence has helped the market record a considerable revenue which is expected to grow further in the future. 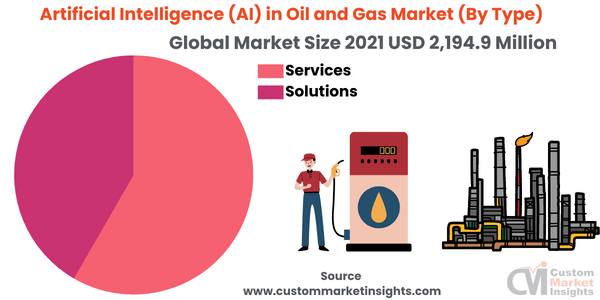 The rapid research and development programs carried out by the key market players with a view to introducing modern technology into the market have emerged as a major opportunity for the growth of artificial intelligence in the oil and gas market. The inclusion of artificial intelligence into the system has made the process quite easy for the manufacturers to maintain the records and the equipment which can be kept under constant check with the help of machines and technology.

Based on operation, the segment upstream has emerged as the major market about the large number of shares that have been acquired by it goes to the increasing demand among potential consumers all over the world. Based on components, the solutions segment has emerged as the largest market for the huge demand for advanced solutions among the key market players. The segment of services has also performed quite well and is expected to show better growth over the period. Based on geography, the region of North America has emerged as the largest consumer of artificial intelligence in the oil and gas market. The huge number of industries which are involved in the oil and gas business how emerged as the potential consumers of artificial intelligence and hence the region is emerging as a major market player. 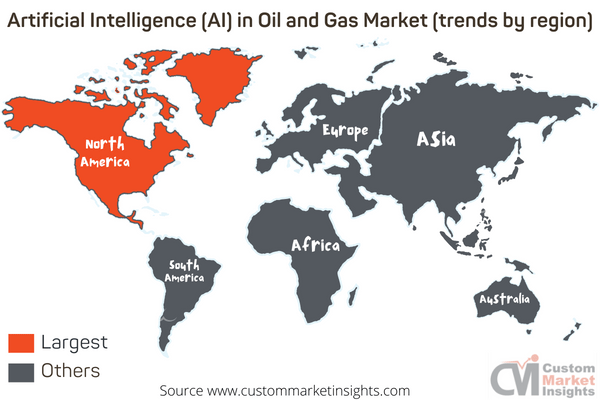 The region of Asia Pacific has also emerged as a global market for artificial intelligence about the huge number of industries that have come up in recent years with the active participation of the government that has helped the market of artificial intelligence in the oil and gas market to record a considerable revenue over the period which is expected to further increase in the times to come. The huge client base in the Asia Pacific region about the huge number of startups that have come up in recent years has helped the market record considerable revenue over some time. The European nations have also contributed significantly to the market of artificial intelligence and gas and oil market.