Exclusive, in-depth market intelligence can help you increase your Revenue.

The collective deposition makes the thin-film solar panels of the thinner PV layers made from silicone. These thin-film solar cells are available in different shapes and colors. The thin-film layer is constructed to generate increased output as a convenient solar module. Their thickness is much less than the conventional PV modules, and they perform better than PV modules. 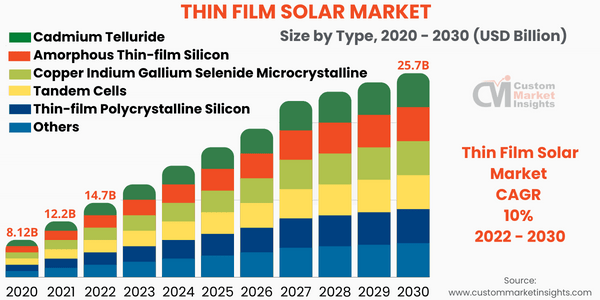 This report includes the market trend analysis, growth factors, market segments, and key players that play a crucial role in the growth of the thin-film solar market across the globe.

The thin-film solar cells are the greater alternative source for electricity generation using renewable resources. The market growth is driven by the lightweight composition and convenient installation, along with the formidable demand for electricity due to the increased population. Being more convenient than the conventional method, the thin-film solar is widely adopted in the commercial and residential sectors.

In addition, thin-film solar cells are comparatively more affordable than traditional ones, which makes them favorable for utility applications. The additional factors that drive the market growth include the initiatives and policies introduced by the government. Governments around the globe have widely promoted the use of renewable energy sources and offered various subsidies that uplifted the thin-film solar market.

As a result of technological advancements, the reduction of cost per production and the rapid colonial urbanization have led to market growth. Solar thin-film cells’ production and installation costs have declined recently, leading to their adoption.

To meet the current demands, various key players have operated in the global market to install and develop thin-film solar panels across different regions, which boosts the market growth. 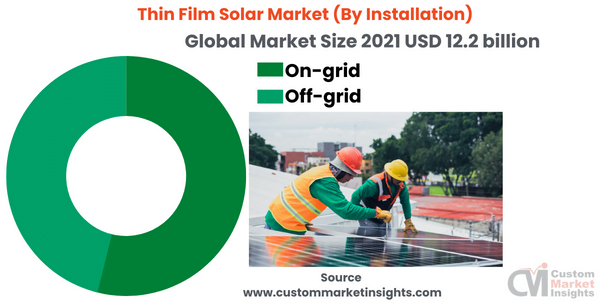 Solar thin film market, segmentation based on the Type

based on type, the market is bifurcated into Cadmium Telluride thin-film cells, Amorphous Thin-film Silicon cells, Copper Indium Gallium Selenide cells, Microcrystalline Tandem Cells, Thin-film Polycrystalline Silicon, and Others. Cadmium telluride has the largest market share in 2021 and is expected to increase rapidly during the forecast period. Cadmium telluride cells are one of the latest inventions in the solar market, built for maximum light absorption and are highly efficient compared to conventional solar panels.

The other benefits are its non-toxic nature, low manufacturing and maintenance cost, high light absorption capacity, and ability to work in low light. The cadmium-telluride cells use thinner semiconductors to absorb the light. The CdTe thin film is a high-throughput technology that can quickly be deposited to the surface. CdTe solar panels are installed in some of the world’s largest solar PV stations, which account for a major market share. The only problem with the CdTe cells is that they lose their efficiency quickly, which needs to be rectified for future market growth.

Based on the installation, the global market is categorized into on-grid and off-grid installations. The on-grid segment held the largest revenue shares in 2021 and is projected to witness rapid growth, with a larger revenue share in the forecast period. This can be attributed to the increased demand for electricity generation through renewable resources coupled with wide distribution networks and the increased demand from remote places with insignificant electricity facilities, propelling the growth of the on-grid segment in the global market.

Based on the installation, the market is segmented into commercial, utility, and residential sectors. The utility segment earned a larger market share in 2020 and is expected to maintain its position during the forecast period. This can be attributed to rapid urbanization leading to high demand for electricity generated through renewable sources. 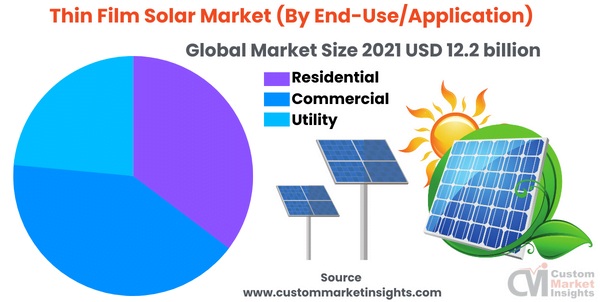 The environmental awareness associated with GHG and carbon emission is one of the leading factors that ensure market growth for the utility segments. The emergence of large-scale objects and research developments for improving manufacturing and maintenance costs can propel market growth in the utility sector. The thin-film solar market can be widely observed in the utility sectors due to the emergence of developed technologies and increased R&D activities over time.

The major contribution can be accounted for by the countries such as China and India, which have a large consumer base due to increased population, and the demand for renewable sources for electricity generation is considerably high. In 2018, China’s National Development and Reform Commission (NDRC) introduced a draft policy to increase the renewable energy target from 25% to 35% by 2030. Around 40 GW of new renewable capacity is expected to be connected to the grid in 2019, with around 50% of the new capacity expected to come from large-scale solar plants. The remaining share is expected to come from smaller and decentralized systems. 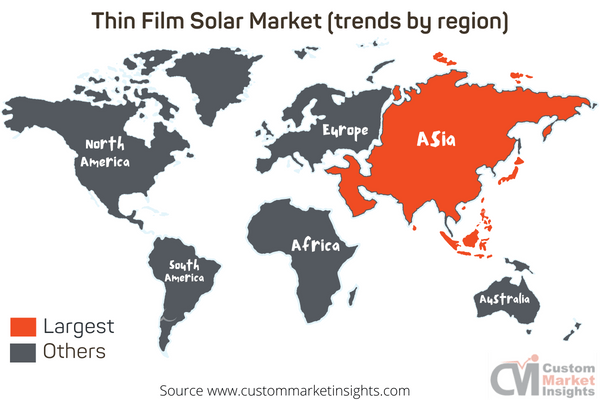 Various companies play a major role in the development of the thin-film solar market across the globe due to the high consumer base and demand for sustainable development. These companies focus on organic growth strategies that include product launches, approvals, patents, etc.

The industries halted their work due to the lack of labor and manforce, due to which the industrial operations and the supply chain were also disrupted, creating a deep impact on the global thin film solar market, which witnessed a decline in its growth. Furthermore, the sales demand and supply both declined during the pandemic. As their sales directly depend on the demand, the sales got affected.

In order to get the most precise estimates and forecasts possible, Custom Market Insights applies a detailed and adaptive research methodology centered on reducing deviations. For segregating and assessing quantitative aspects of the market, the company uses a combination of top-down and bottom-up approaches. Furthermore, data triangulation, which examines the market from three different aspects, is a recurring theme in all of our research reports. The following are critical components of the methodology used in all of our studies:

On a broad scale, raw market information is retrieved and compiled. Data is constantly screened to make sure that only substantiated and verified sources are taken into account. Furthermore, data is mined from a plethora of reports in our archive and also a number of reputed & reliable paid databases. To gain a detailed understanding of the business, it is necessary to know the entire product life cycle and to facilitate this, we gather data from different suppliers, distributors, and buyers.

Surveys, technological conferences, and trade magazines are used to identify technical issues and trends. Technical data is also gathered from the standpoint of intellectual property, with a focus on freedom of movement and white space. The dynamics of the industry in terms of drivers, restraints, and valuation trends are also gathered. As a result, the content created contains a diverse range of original data, which is then cross-validated and verified with published sources.

Simulation models are used to generate our business estimates and forecasts. For each study, a one-of-a-kind model is created. Data gathered for market dynamics, the digital landscape, development services, and valuation patterns are fed into the prototype and analyzed concurrently. These factors are compared, and their effect over the projected timeline is quantified using correlation, regression, and statistical modeling. Market forecasting is accomplished through the use of a combination of economic techniques, technical analysis, industry experience, and domain knowledge.

Short-term forecasting is typically done with econometric models, while long-term forecasting is done with technological market models. These are based on a synthesis of the technological environment, legal frameworks, economic outlook, and business regulations. Bottom-up market evaluation is favored, with crucial regional markets reviewed as distinct entities and data integration to acquire worldwide estimates. This is essential for gaining a thorough knowledge of the industry and ensuring that errors are kept to a minimum.

Some of the variables taken into account for forecasting are as follows:

• Industry drivers and constraints, as well as their current and projected impact

• The raw material case, as well as supply-versus-price trends

We allocate weights to these variables and use weighted average analysis to determine the estimated market growth rate.

This is the final step in our report’s estimating and forecasting process. Extensive primary interviews are carried out, both in-person and over the phone, to validate our findings and the assumptions that led to them.
Leading companies from across the supply chain, including suppliers, technology companies, subject matter experts, and buyers, use techniques like interviewing to ensure a comprehensive and non-biased overview of the business. These interviews are conducted all over the world, with the help of local staff and translators, to overcome language barriers.

Primary interviews not only aid with data validation, but also offer additional important insight into the industry, existing business scenario, and future projections, thereby improving the quality of our reports.

All of our estimates and forecasts are validated through extensive research work with key industry participants (KIPs), which typically include:

The following are the primary research objectives:

• To ensure the accuracy and acceptability of our data.

• Gaining an understanding of the current market and future projections.

1 . Which region will dominate the global Global Thin-Film Solar market?

“Asia-Pacific” region will lead the global Global Thin-Film Solar market during the forecast period 2022 to 2030.

2 . Which are the driving factors of the Global Thin-Film Solar market?

3 . Who are the top players operating in the Global Thin-Film Solar market?

4 . What will be the CAGR of global Global Thin-Film Solar market?

The global Global Thin-Film Solar market is expanding growth with a CAGR of approximately 10% during the forecast period (2022 to 2030).

5 . What is the existing size of Global Thin-Film Solar market? 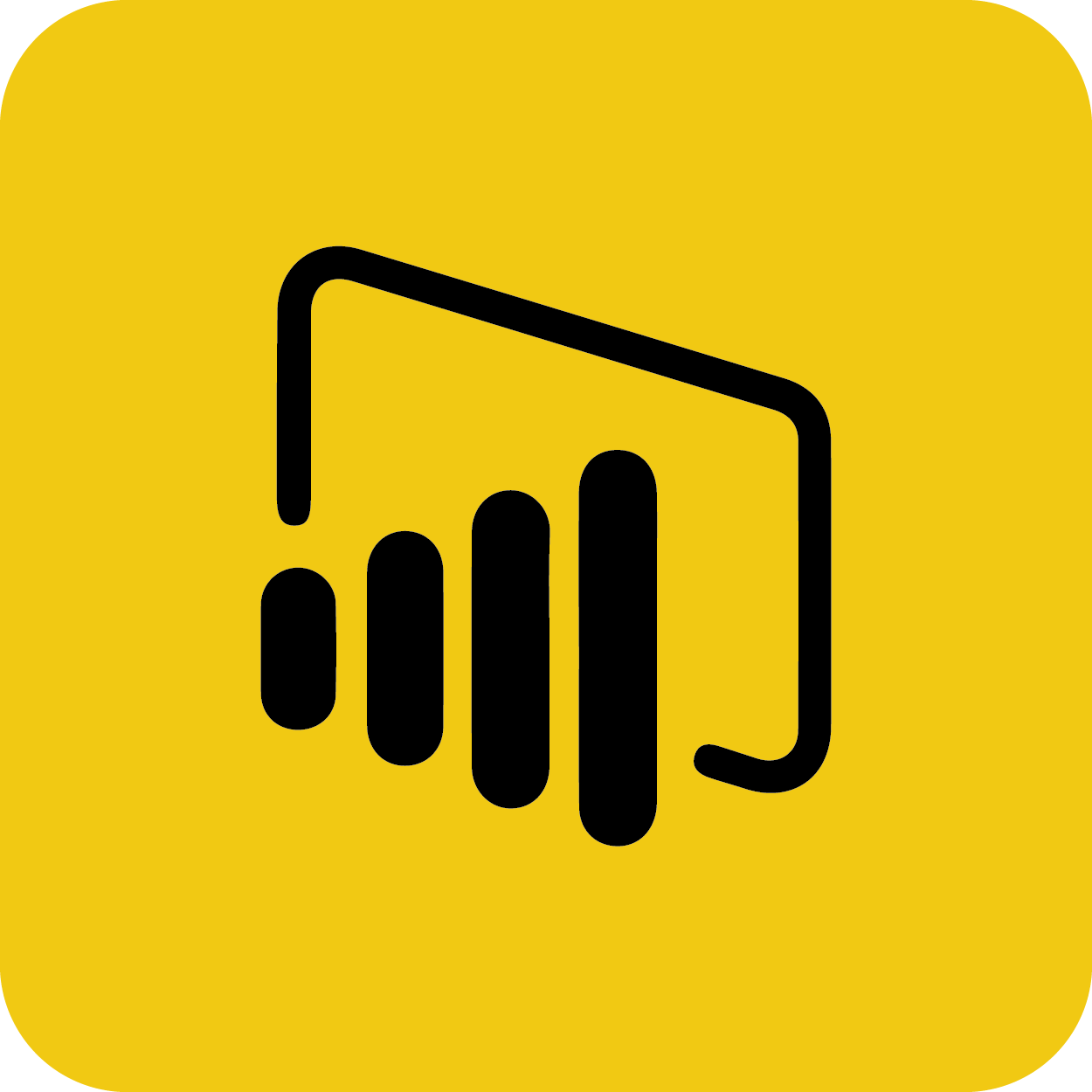