According to Custom Market Insights (CMI), The size of the Global Electric Vehicle Market was worth around USD 170 billion in 2021 and is predicted to grow to around USD 1105 billion by 2030 with a compound annual growth rate (CAGR) of roughly 23% between 2022 and 2030. 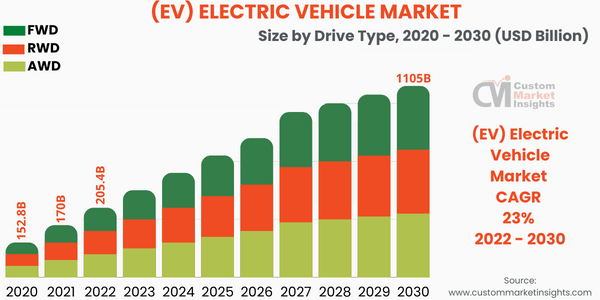 The demand for electric vehicles has increased due to growing worries about the pollution produced by conventional internal combustion (IC) engines, which has positively impacted the electric vehicle market.

The sale of electric vehicles is projected to increase in the future due to a significant number of government programs, including tax rebates, grants, and other non-financial perks like access to carpool lanes and subsidies. For instance, German automakers increased their cash incentives for electric cars in November 2019 to delay the switch from internal combustion to battery-powered engines to prevent hazardous emissions. The sale of electric vehicles has increased significantly in recent decades in nations including the United States, China, and several European nations; this, in turn, will help the industry expand.

However, several key obstacles that impede market expansion include a lack of charging infrastructure, variances in charging load, and a lack of standardization. Several regions, including China, Europe, the United States, Japan, Korea, and others, have varied standards for charging electric vehicles. To address this issue, certain electric vehicle manufacturers, like Tesla Inc., are concentrating on a worldwide standardization of the charging infrastructure. Nevertheless, it is projected that increasing the use of electric vehicles in the public and commercial sectors will propel the market. For instance, the UK government approved 200 electric buses in 2020, intending to make all buses electric by 2025, which may reduce CO2 emissions by roughly 7,400 tonnes annually.

The market for Electric vehicles (EV) is segmented into product and vehicle types. The market for commercial vehicles is anticipated to expand at the highest CAGR shortly. Due to rising fuel prices, tough immigration laws imposed by governments, an increase in independent delivery vehicles, and the addition of electric motorcars and vehicles, this market segment is expected to grow rapidly.

China, Japan, and South Korea are the Electric Vehicle market leaders for electric vehicles in the Asia Pacific region. China, the world’s largest producer and consumer of electric vehicles has a monopoly on the EV market in the area. Their government has taken action, including providing subsidies for EV buyers, enacting laws requiring all automakers to produce EVs in proportion to the volume of vehicles they produce, providing significant funding for installing EV charging stations throughout major cities, and enacting regulations against excessively polluting vehicles. 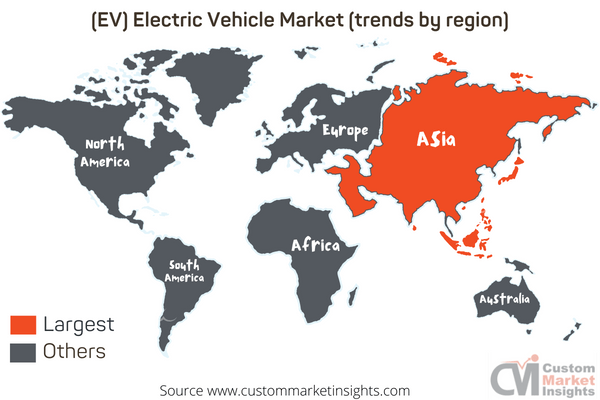 The EV market has also been expanding in Japan and South Korea. Their governments installed EV charging stations, created pollution standards, established deadlines for switching from ICE vehicles to full or hybrid EVs, and took other measures to assist the growth of EV demand.

Due to several Electric Vehicle market participants, there is intense rivalry in the global electric vehicle market. The incumbent players emphasize innovation and the creation of new models and technologies to address their weaknesses and solidify their position in the global market. Several market participants are also funding EV companies to increase their local footprint. 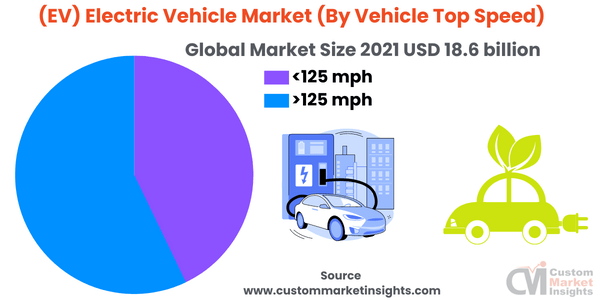 Some of the prominent players

The global Electric Vehicle market is segmented as follows: 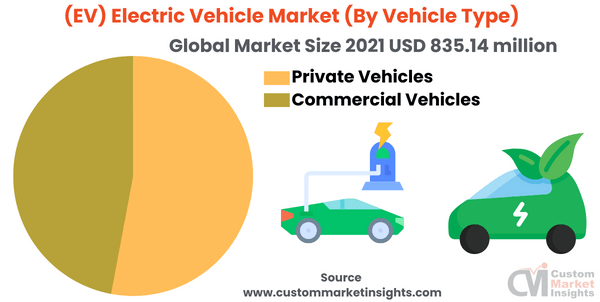