The report analyses the Raisins market’s drivers and restraints, as well as the impact they have on-demand throughout the projection period. In addition, the report examines global opportunities in the global Raisins market. 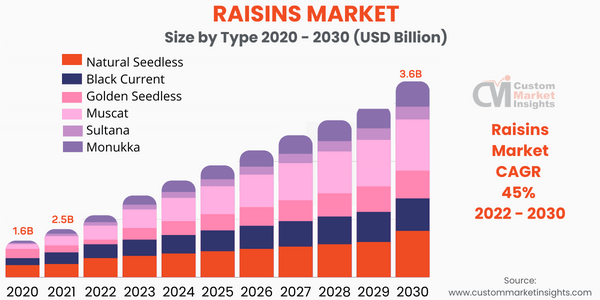 The production of Raisins has been shifting from conventional labor-intensive operations that start with hand-picking grapes as they continue to become a staple of everyday diets. Growers are quickly mechanizing their production process due to an exponential spike in raisin consumption and a cloud of functional foods and health consciousness. California, which produces about 40% of the world’s raisin supply, has seen its business grow as a result of the emergence of numerous raisin types and drying techniques

Various Health Benefits of Raisins are Surging its Consumption

The trend in consumer consumption toward a healthy, nutrient-dense diet has fueled the growth of the Raisins market. The availability of substitute products, such as prunes or dried cranberries, which have nearly the same nutritional value, may restrict the market for Raisins. 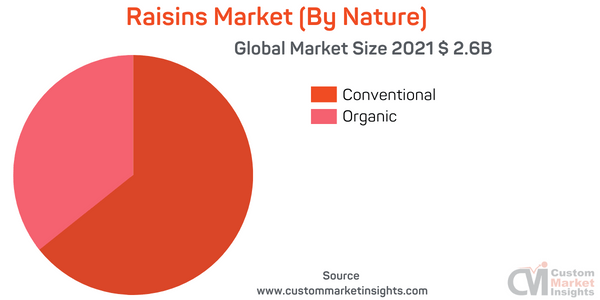 The market for Raisins is segmented into product type, nature, end user, and distribution channel. Based on nature, the market is bifurcated into conventional and organic. Phytochemicals are used for making the majority of natural Raisins. They can improve tooth health, and the boron’s presence helps support bone growth. More and more people are buying healthily because these seedless Raisins are widely available, so the market is likely to grow throughout the forecast period. Further, on the basis of distribution channels, the online segment is experiencing high growth.

Expanding the client base helps the Raisins industry stay competitive while impacting its growth. Adopting alternative distribution channels, particularly e-commerce sites, is a key focus for some manufacturers. The availability of a large variety of products and the simplicity of choosing influence online buyers, who constantly increase the market penetration and force strategy realignment.

Due to the tradition of festivals and gift-giving in emerging nations, it is anticipated that revenue from the target market in Asia-Pacific will increase significantly throughout the projection period.

On the other hand, it is anticipated that demand for sweet dried fruit will significantly expand throughout the projection period in emerging nations like China and India. Also, Chilean Raisins are gaining popularity in various countries, and China has appeared to be one of the significant markets for Chilean grapes. It is due to a significant increase in disposable income and rising health consciousness among customers in this area. 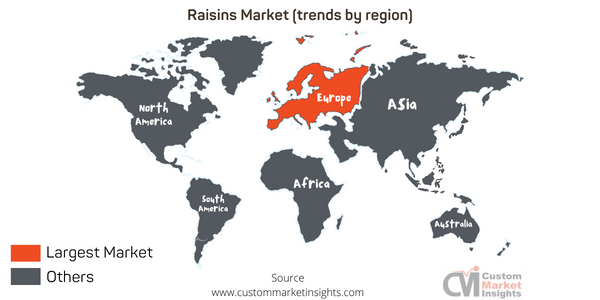 The market for Raisins is highly fragmented. The large concentration of players operating in the Raisins market influences the overall pricing strategy of the product, as per prevailing market conditions. The manufacturers are involved in producing and supplying Raisins for diversified application bases. The presence of a strong supplier base with a large customer base moderately limits the chances of competitive rivalry amongst the produces.

Some of the prominent players

The global Raisins market is segmented as follows: